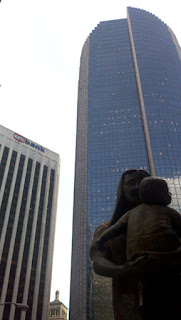 Economists specializing in the study of Islamic finance and economics have reduced Islamic laws governing financial and economic transactions to two: proscription on receiving or paying “interest” and mandating that investors and developers (lenders and borrowers) share the gains and losses of the enterprise in which they are more or less partners. This theory is widespread but it is based on a very basic, and perhaps outdated, understanding of the primary sources of classical Islamic law. Moreover, most of the works and publications advancing this perspective are built on secondary sources and rarely engage primary materials. This essay challenges the ideas and approaches behind this perspective and proposes a model that takes into consideration the need to protect the poor and the desire to make profit, which is the motivating force behind a thriving economy.
While Islamic scriptures clearly prohibit profiting from the poor, supposedly sharī’ah-compliant Islamic financial and exchange laws circumvent prohibitions and limitations on ribā, monopolism, debt, and risk while failing to address the fundamental purpose behind the prohibitions—mitigating poverty. This study provides a historical survey of the principles that shape Islamic finance and exchange laws, reviews classical and modern interpretations and practices in the banking and exchange sectors, and suggests a normative model rooted in the interpretation of Islamic sources of law reconstructed from paradigmatic cases. Financial systems that overlook the nexus between poverty and usury harm both the economy and poor and middle class consumers and investors rather than addressing the causal relationship between interest-charging models and poverty. This study shows how Islamic Financial Institutions (IFIs) have failed to meet the social requirements they were intended to address and also presents a theoretical framework for Islamic finance and exchange laws that proscribes usurious transactions involving people caught in the cycle of poverty and need.
____________
FacebookTweetPinLinkedInPrintEmail

Will Egypt Have A Revolution?

Combating ISIL should not be America’s business, it is Saudi Arabia’s