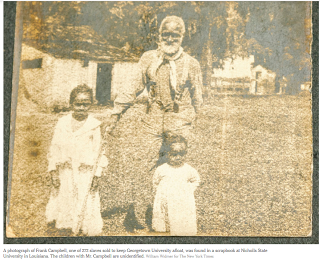 Abstract: Teaching future generations is indeed a costly endeavor, especially when governments allocate little or no money to higher education. Universities’ administrators are always under extreme pressure to keep their institutions afloat. However, as learning and training institutions, universities instill values and norms that guide future citizens and professionals towards a better future. Therefore, the source of money is just as important as the amounts of money for universities and for the people they serve. It has been revealed that Georgetown University would not have survived if it did not profit from selling hundreds of human beings and participate in the cruel slave trade. Ostensibly, Georgetown is unable to totally break from its legacy of profiting from slavery and racism. Its dependence on money provided by Muslim individuals and/or Islamic regimes with a history of human rights abuses, sectarian, and racist practices raises questions about its ability to overcome and dispose of both Catholic and Islamic legacies of depravity and decadence.
________
About 200 years ago, to save Georgetown College, priests sold human beings thus fully endorsing and profiting from the brutal, dehumanizing institution of slavery. To date, we’ve learned of the existence of records documenting at least 272 human beings, like Mr. Frank Campbell, who were sold so that that college would survive to become the institution we now call Georgetown University.  Evidently, for these priests, the survival of an educational institution outweighed the abuse of the dignity of hundreds of human beings. Today, to gain prominence as an elite university, Georgetown has established financial ties to individuals and governments with social and ideological affinity to racism, sectarianism, and absolutism. Georgetown’s connections to Wahhabism and individuals who are interested in whitewashing that sect adds to the University’s legacy of exploitation in pursuit of elitism and financial advantages. Recently, Georgetown’s dark history with slavery was brought to the forefront once again when one of its faculty members used dubious logic and absolutist interpretation of ancient texts to argue that slavery is morally justified in Islam, a position that conforms to that held by groups like ISIL and al-Qaeda.
In an audio recording, the director of Georgetown’s Alwaleed Ibn Talal Center for Muslim-Christian Understanding, Jonathan Brown, is heard equivocating: “The Prophet of God had slaves… There’s no denying that. Are you more morally mature than the Prophet of God? No you’re not.”  The implication is that, since, reportedly, Prophet Muhammad had slaves 1400 years ago, it is morally right to own slaves and it is morally right to continue to own slaves today. While Georgetown sanctified the university and relativized slavery in the 1830’s, today, one of its faculty sanctifies Muhammad and relativized slavery the same way ISIL sanctifies the “Islamic State” and relativized slavery, rape, and religious and sectarian cleansing.
Parents sending their children to learn from faculty members who use this kind of logic and embrace a morality rooted in absolutist reading of contested texts should be concerned. Muslims who seek guidance from a scholar associated with an endowed chair funded by the ruling family of Saudi Arabia, demonstrably known for its abuse of human dignity, should be wary about the recasting of Wahhabism as Sunni Islam. Besides the conflict of interest and the methodological absurdity, Brown’s assertions are flawed for many factual and logical reasons.
First, there is no absolute evidence that Prophet Muhammad owned slaves. Those who contend that Muhammad had slaves rely on oral reports (written down three centuries removed from the time of Prophet Muhammad) invoked, preserved, and transmitted by figures who owned and even abused slaves themselves. Therefore, to emphatically assert that there is no “denying that Prophet Muhammad had slaves” amounts to suggesting the existence of a fact beyond any reasonable doubt. There is doubt beyond reasonable levels about events that took place more than 1400 years ago, especially when all the textual evidence is derived from only one school of thought: Salafism.  Indeed, leaders and wealthy individuals gave Prophet Muhammad slaves as “gifts” but he emancipated them: the women became his wives and the men became his mawāli (i.e. mu`taq [freed], as was the case with Zaid (given to him by the wealthy Khadijah, who married him later). However, many of the aristocracy of Arabia, who were absorbed into the newly established Islamic state, continued to own slaves. Considering that it was this aristocracy that monopolized most leadership positions after the death of Prophet Muhammad, it is easy to figure out why the institution was kept alive and by whom.

Lack of real representation of Syrians doomed the Geneva meetings

What Happens when a Leftist Philosopher Discovers God?

Revolutions and rebellions and Syria’s paths to war and peace