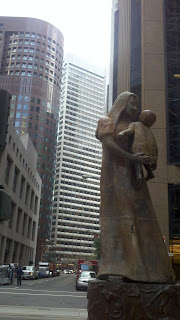 When Romney resisted releasing his tax records unless he becomes the GOP nominee, the discussion that was started by the Occupy movement found new life. The fundamental issue is fairness in the U.S. economic system—not class warfare, as some would like to characterize it. Many in the Occupy movement believe that corporate influence in the political process unfairly disadvantages working people and rewards greed. One of the areas unfairly influenced by wealthy corporations and persons is the tax code. Many Occupiers want that system reformed.
The 1% have the means to not only influence the debate, but to buy the political leverage necessary to secure favorable outcomes. The absolute majority of the 99% want a fair system that neutralizes these influences. They don’t want giveaways from the 1% and they are not opposed to capitalism and private property ownership.
The NYT reported that Mitt Romney, for instance, “has called for keeping the current low rates for capital gains and eliminating capital gains altogether for taxpayers making less than $200,000.” Joe Scarborough, a conservative commentator and former lawmaker, defended the low 15% percent tax rate paid by Romney and other wealthy individuals by suggesting that the money taxed at the 15% rate is actually taxed twice: first it is taxed as income at a higher rate and then taxed again as investment income. That is a disingenuous and misleading characterization of the facts. Here is why:
Let’s say a hardworking Joe makes $100,000 a year. That income will be taxed at a rate closer to 35% than to 15%. After years of hard work, Joe saves $50,000, which he invests. At the end of the year, Joe receives a statement showing that he earned $2500 through capital gains, dividends, interest, etc. Only the $2500 Joe earned on top of his original investment of $50,000 will be taxed at the 15% rate; Joe is not taxed at a 15% rate on $52,500 (his original investment plus his gains). So there is no double taxation.
Now let’s look at another scenario. John is a software engineer who has worked for Microsoft since the early 1990’s. John’s yearly salary is about $67,000. But when John was hired, he took the stock option the company offered its employees, which consisted of 5000 shares priced at $5 a share. After more than five years, John was able to sell these shares for the market value of $300 per share (a gross sale value of $1,500,000). The net income (after deduction for cost and fees) is taxed only once, at the 15% rate. Furthermore, it is only taxed the year it is sold, not every year John saw gains through increase in stock prices.
Let’s look at a third example. Brinn is a programming guru. He quit school to start an Internet company. His company was so successful he valued it at $1,000,000 and made it a public company. Before the initial IPO, Brinn decided arbitrarily to fix the value of each share in his company at $1. Now Brinn’s company is available for public trade, but not before he reserved 500,001 shares for himself and 200,000 shares for his employees or his favorite charity. Brinn is now the CEO of the new public company, too. He decides that he will receive $1 a year in salary, but will receive additional compensation in the form of stock options.
Because Brinn’s company is awesome, everyone wants in. Joe used some of his saved money to place a bid to buy some shares. Before Joe is able to fulfill his order, the price of a single share in Brinn’s company jumps to $50. Suddenly, Joe becomes the proud owner of 100 shares costing him about $5000, which drives Brinn’s wealth to over $25,000,000.
Five years later, Joe sells his 100 shares at $100 per share (earning about $5000 on top of his original investment). Brinn, on the other hand, earns $50 million. He will pay the 15% tax rate on those earnings, because he does not have to claim it as earned salary income on his tax return. That is a best case scenario. Another equally likely scenario is this: after five years, Joe is forced to sell his shares to pay for an unexpected event. Although the price of the stock was up at some point near $100, when Joe needed to the cash however, the stock was $48 per share. Joe lost $200 in this investment. Brinn is still $47 per share ahead.
Capital venture investors use a multitude of methods to avoid paying the higher tax rate that 99% of monthly wage earners must pay. Stock options, property reclassification, tax shelters, and charitable donations are just few ways they control their wealth and avoid paying higher taxes. Business professionals have access to tools and knowledge that allow them to find the loopholes they need to pay minimum taxes.
Moreover, corporations and wealthy individuals “tax” the infrastructure, the natural resources, and environment more than the rest of us. They use heavy trucks on our highways and roads to transport their goods. CEOs travel in private jets that pollute our environment while hundreds of us travel crammed in crowded airplanes, buses, and trains. They use more energy in their huge mansions and air-conditioned offices in skyscrapers, while the 99% share fewer resources and use communal services.

In short, the 99% are not asking to take the 1%’s money, they just want a fair system that offers everyone equal access to resources, to public servants, and to the law. The 99% want true equal opportunity.
FacebookTweetPinLinkedInPrintEmail

absent: Western journalists second hand reporting on the Syrian war and the propaganda against the Syrian government

An Alternative Statement from President Donald J. Trump on Ramadan