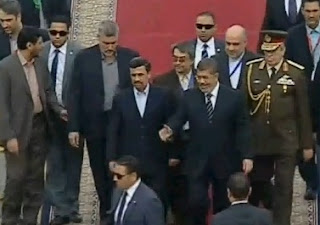 Representatives of 57 states, members of the Organization of the Islamic Cooperation (OIC), convened for their regular summit in Cairo this week. Among the notable attendees is the president of Iran, Mahmoud Ahmadinejad. The latter received a red-carpet welcome as Egypt’s new president, Mohammed Morsi, greeted him on the tarmac at Cairo International Airport. The event is historical since this is the first visit by an Iranian president to Egypt since the 1979 Islamic Revolution.

The visit is also full of symbolism and irony for both sides. President Ahmadinejad met with Sheik Ahmed al-Tayeb, the head of al-Azhar, the highest institute of Sunni Islamic learning in Egypt, which was originally founded by the Fatimid Shiites. Sheik al-Tayeb might have had the Shiite connection in mind when he met President Ahmadinejad. He deliberately avoided meeting him at the entrance of the institution, which is the custom. Al-Tayeb also sent his deputy to accompany Ahmadinejad to the news conference. Apparently, he wanted to emphasize his new independence from political leaders, another byproduct of the Egyptian revolution, and his role as a leader of Sunni Muslims. In a press conference that followed the meeting, the adviser to al-Tayeb went further slamming Iran for its support of Syria’s regime and its support to protesters in Bahrain. He also criticized Iran for its treatment of Sunni Muslims inside Iran. Generally, the leaders of al-Azhar called on the Iranian leadership to allow more freedom for Sunnis to practice their brand of Islam.
Talk on religious freedom sounds reasonable and progressive. Indeed, Iran and all other countries in the region should honor the inherent rights of ethnic and religious minorities. But taken in the broader context, Egyptian leaders’ rhetoric on rights is one-sided and not representative of the facts.
Shiite Muslims are a majority in only three Muslim countries: Iran, Iraq, and Bahrain. In Iraq, Shiites, despite their numerical advantage, have been ruled by the minority Sunnis and they were subjected to all kinds of discrimination and oppression. It was only after the 2003 U.S. invasion of Iraq and the subsequent elections that Iraqi Shiites became politically empowered.
The same can be said about the status of the Shiites in Bahrain. Although nearly 75% of the people of Bahrain are Shiite Arabs, the Sunni ruling clan has exerted a virtual monopoly on all institutions of economic and political power. The ongoing uprising in Bahrain is about remedying this situation. Yet, the Sunni Arabs ignore the plight of the people of Bahrain simply because they are not Sunni. Another leader of Sunni Islam, Yousef al-Qaradawi, shamelessly argued that he would support the uprising in Bahrain only when/if Sunnis join in.
In Iran where the Shiite majority is in control, the constitution does privilege Shiites over all other religious sects. Undoubtedly, that ought to be changed. Citizenship and political rights should not be dependent on ethnic and religious affiliation. Indeed Iran should be asked to practice the Islamic ideals it preaches: there should be no discrimination on the basis of skin color, ethnicity, or religious denomination.
With that said, the Arab Sunnis should also look in their own backyards. Shiite Muslims are minorities in many other Muslim and Arab countries and they are oppressed in all these countries. In Saudi Arabia, the marginalization and persecution of Shiites in eastern Arabia is well documented. Zaydi Shiites in Yemen have been pushed to the economic and political margins and they have been fighting for their rights for decades. Shiite Muslims in Pakistan have been targeted by Sunni suicide bombers since 1995; thousands lost their lives in mosques, markets, and places of religious rituals. In Egypt, Tunisia, Algeria, Morocco and other Sunni majority countries, special measures are being proposed to stymie what they call the “Shiite infiltration.” Some groups are proposing new laws that will criminalize conversion to Shiite sects.
In the end, the goodwill capital in Egypt, courtesy of the dignity revolution, should not be besmirched by sectarian patronage. A dignity revolution is about the dignity of all. The leaders of the Arab Spring countries should be mindful of this and they should speak with equal force about the rights of all. If the Arab rulers want more rights given to Arab minorities in Iran, they should be prepared to grant Berber, Kurdish, Touareg, and other ethnic minorities the same rights in Arab countries. If Sunni Muslims want the rights of Sunnis in Iran to be respected, they must be prepared to respect the rights of Shiites, Jews, Christians, and other sectarian and religious minorities in their midst. To ask for more rights for Sunnis while proposing laws and producing media propaganda that limit the same rights for Shiites is tantamount to repugnant supremacism.
_________________
* Prof. SOUAIAIA teaches at the University of Iowa. He is the author of a number of books and articles. Opinion herein are the author’s, speaking on matters of public interest; not speaking for the university or any other organization with which he is affiliated.
FacebookTweetPinLinkedInPrintEmail

Obama in Saudi Arabia to talk security and terrorism; the Saudis seem prepared, but are they really?

Policy and politics of the first democratic government in Tunisia