Abstract: Mere hours before Turkey’s president, Recep Tayyip Erdoğan, visits with his Russian counterpart in Sochi, his government clarified the purpose of its invasion of Northern Syrian. The Turkish government frames its intervention as partly humanitarian, partly security missions. Considering that Erdoğan has called for such a “safe zone” as early as 2015, the political purpose of the “safe zone” can hardly be ignored. More significantly, the legal status of the proposed “safe zone” must be assessed. In this brief note, I examine the Turkish claims and weigh them against legal standards. 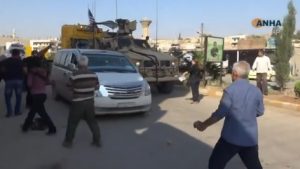 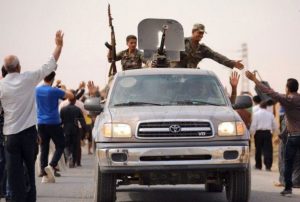 In preparation to his meeting with Russia’s president, Vladimir Putin, Recep Tayyip Erdoğan and his government provided an explanation of the authority and purposes of Turkey’s military intervention in northern Syria. With no government of any major country in the world providing public, unqualified support to Turkey’s “Operation Peace Spring,” Erdoğan places huge premium of this meeting with Putin for a number of reasons.

With US administration withdrawing its troops from northern Syria, Russia is the remaining world power with military and political presence in Syria. Despite its open and unwavering support to the government of Syria, the Russian government, managed to situate itself in a position where it can engage with even the most ardent anti-Assad actors. Turkey, too, tried to find space between the anti- and pro-Assad camps: it continued its support to armed groups fighting the Syrian government, but Turkey also sat down with Russia and Iran to map out a political solution within the framework of Astana and Sochi meetings. With the 150-member committee tasked with rewriting the Syrian constitution starting its work soon, Erdogan wants the security problems that resulted from his embrace of armed groups solved as well. Erdogan’s justification for his continued military intervention in Syria has now come to some clarity and urgency.

Our goals are to protect our borders, prevent a terror corridor in northern Syria, put an end to the presence of YPG/PKK, Daesh and all other terrorists in the north of Syria, and to establish a safe zone so as to enable two million displaced Syrians, including Arabs, Kurds, Christians, Ezidis, and Chaldeans, to voluntarily and peacefully return to their lands and homes.

The above statement is meant to provide the authority for and process of carving land in a sovereign country.

These are the authorities upon which Turkey is basing its military actions in Syria. The important question is this: does these claims meet any objective test that could determine if Turkey’s actions are justified?

Considering all, not isolated, statements Erdoğan has made since the start of the armed conflict in Syria and considering evidence collected in the last 8 years, it is more likely that Erdoğan’s actions, should he be allowed to occupy Syrian territories, will result in committing war crimes not ending terrorism or preventing war crimes. The so-called “safe zone” will allow Turkey to create a buffer zone, along its borders with Syria, populated by families and relatives of armed groups trained, financed, and supported by the Turkish government. Such actions are in contravention of many international norms and treaties, including the following:

The legitimate concerns of Turkey must be weighed against the legitimate concerns of Syria and other nations in the region within the framework of international humanitarian laws and conventions. Turkey’s security concerns related to its southern border can be addressed within the framework of the 1998 Adana Agreement with the Syrian government. Syrians displaced by the war must be addressed once a political settlement, which must include a truth and reconciliation agreement, is reached through the work of the constitutional committee, facilitated by the UN.

A political solution in Syria is likely to result in a political structure that has a strong central government headed by an executive president (responsible for national security and foreign policy), and a domestic authority headed by an executive prime minister formed by political entities elected to the parliament, and elected regional and mayoral governments insuring decentralized rule over diverse regions and communities. Should this happen, it will then be possible for all displaced persons, including those in Turkey, to return to their homes wherever their homes are, not to a “safe zone” created by displacing others from their homes. The safety of the returnees will then be assured by the regional and mayoral governments in every region and in every town and city, not just by the central government.

__________
* Prof. SOUAIAIA is a member of the faculty at the University of Iowa with joint appointment in International Studies, Religious Studies, History, and College of Law. Opinions are the author’s, speaking on matters of public interest; not speaking for the university or any other organization with which he might be affiliated.

Can Iran Close the Strait of Hormuz?