Skip to content
FacebookTweetPinLinkedInPrintEmail
Takfīris‘ path to their “caliphate” is soaked with the blood of Muslims
by Ahmed E. Souaiaia* 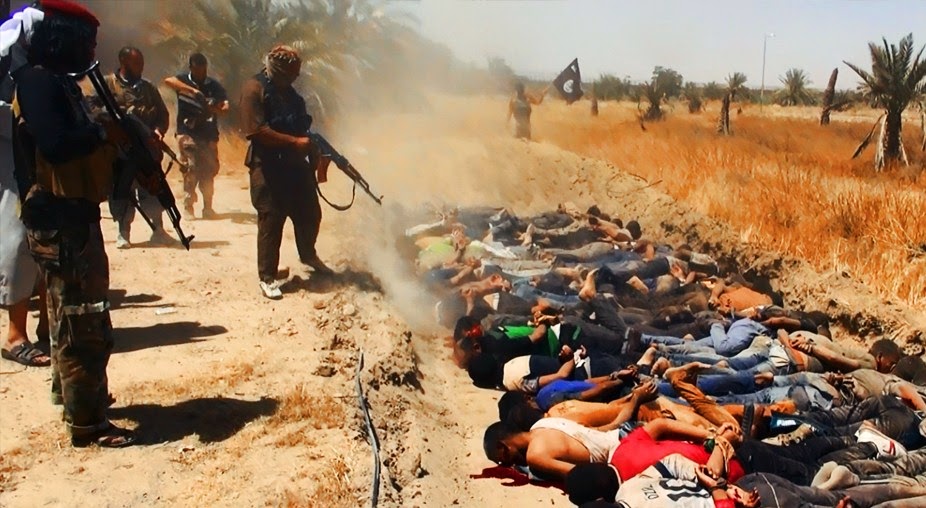 The most important event of the summer might end up being ISIL’s (Islamic State in Iraq and the Levant) declaration that it has restored the caliphate. For the second time in the past two decades, Salafi Islamists have gained territory and resources to establish a communal entity reflecting their idea of an Islamic state. In the mid-1990s, the Taliban, aided by Saudi and Arab fighters led by Bin Laden, routed fellow Mujahidin to establish the Islamic Emirate in Afghanistan. The Emirate ended when U.S. invaded Afghanistan in 2001. Two weeks ago, ISIL, aided by frustrated Sunni Arabs and former Baathists, led an armed assault on the northern provinces of Iraq, linking them to territories in Syria under its control.

Gaining new territories that are rich in natural resources like water, oil, and gas emboldened ISIL fighters. They now think that they have the military power, economic resources, and ideology to form an independent nation that is governed by their version of Islam—so-called true Sunni Islam. However, the problems they faced immediately upon the declaration signaled the level of disconnect between ISIL ideologues and the reality on the ground. Even the most ardent supporters of their brand of Islam have complained that ISIL’s reinstatement of the caliphate is an error.

Theological and legal concerns aside, the terms of the declaration make it impossible for ISIL to co-exist with its neighbors and other Islamist groups. ISIL’s caliphate is born in a state of war with everyone. Its leader, self-appointed Caliph and Commander of the Faithful Abu Bakr al-Baghdadi declared that the aim of his Islamic caliphate is to “erase national borders, destroy democracy, rid Muslims of deviant elements, and stand up for [Sunni] Muslims.” Most significantly, he stated that “all other Islamic factions, groups, movements, organizations, and parties are obligated to pay allegiance (bay`ah) to him or face death.” Furthermore, given that Muslims have never been ruled by a single political authority since the Islamic civil wars of the seventh century CE, it is safe to say that this caliphate is born dead.
The rise of ISIL is, however, a rebuke to some governments (mostly from the West and the Gulf states) who embrace violence in order to bring about regime change. It is also a confirmation that violence and war will always lead to incurable social division and brutal strife. These realities are manifesting themselves today in Syria and Iraq and in the emergence of sectarian extremist groups like ISIL. Three other key factors have contributed to the rise of ISIL and groups like it: the illegal invasion of Iraq, the militarization of the uprisings in Libya and Syria, and the appeasement of the undemocratic sectarian regimes in Bahrain, Saudi Arabia, and Qatar.
Violent extremism was allowed to thrive when it was confronted militarily but not ideologically. That was both a logical and strategic mistake. Logically, one cannot end an undesired behavior by embracing it. That is, one cannot say that violence is abhorrent, yet use it to achieve one’s goals. By supporting violent groups in Syria, the West and its allies legitimized the very tactics used by ISIL to achieve its goals in Iraq. Strategically, by using violence to eliminate sectarian extremists instead of confronting the rulers and religious authorities in countries that espouse violent sectarian creeds, the West essentially chose to deal with the effects but not the roots of the phenomenon. The solution is to ask countries whose institutions teach hate, supremacy, and exclusion to reform and to respect human dignity. Without addressing the root of the problem, the rulers of countries that embrace the takfīrism will soon be engulfed by the same elements they have produced, tolerated, employed, and/or exported.
ISIL’s reinstatement of the caliphate and its leader’s call to “Muslim scholars, soldiers, and scientists to migrate to the ‘state’” might be a positive development in that it ended al-Qaeda and forced Zawahiri, Bin Laden replacement, into early retirement, created internal strife among Salafis–the stream of Islamists that feeds takfīri fighters, and exposed them as a cross-border threat. ISIL’s action may also result in freeing the rest of world of the preachers of hate and the messengers of death when they migrate to live under the uncompromising justice of the sword and the total surrender of their free choice they want to impose on others.
_________
PS. Caliphate is the governing institution that ruled Islamic societies since the death of the Prophet Muhammad. The caliph is the head of such a government. The qualifications, form of governance, and terms of relationship between the ruler and the ruled differed from person to person and from dynasty/clan to another. After the death of the third caliph `Uthmān, the legitimacy of caliphs became contested and often more than one caliph ruled different regions and different community.
____________
* Prof. SOUAIAIA teaches at the University of Iowa. His most recent book, Anatomy of Dissent in Islamic Societies, provides a historical and theoretical treatment of rebellious movements and ideas since the rise of Islam. Opinions are the author’s, speaking on matters of public interest; not speaking for the university or any other organization with which he is affiliated.
FacebookTweetPinLinkedInPrintEmail

Which Middle-Eastern countries agree with the ban?

Combating ISIL should not be America’s business, it is Saudi Arabia’s