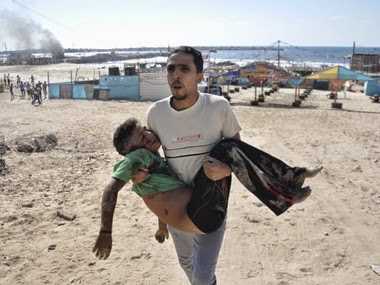 David Ignatius, a journalist with extraordinary access to the halls of power but apparently limited sound reasoning argued that John Kerry has committed a “big blunder in seeking an Israel-Gaza cease-fire.” He explained that “Kerry’s error has been to put so much emphasis on achieving a quick halt to the bloodshed that he has solidified the role of Hamas, the intractable, unpopular Islamist group that leads Gaza, along with the two hard-line Islamist nations that are its key supporters, Qatar and Turkey.” Mr. Ignatius went on to provide a solution: “A wiser course […] would have been to negotiate the cease-fire through the Palestinian Authority, as part of its future role as the government of Gaza. Hamas agreed last April to bring the authority back to Gaza as part of a unity agreement with Fatah that was brokered by Palestinian President Mahmoud Abbas.”

There are serious factual, ethical, geopolitical, and legal problems with Ignatius’ analysis and recommendations.
First, there is no shred of evidence that Hamas is unpopular. The only data we have is that they had won the last round of elections defeating Fatah, the party headed by Mahmoud Abbas. Even as civilians are killed every day, Gazans have not filled the streets to protest Hamas. In fact, Palestinians filled the streets in the West Bank, which is controlled by Fatah, to support Hamas and other armed Gazan groups. It is true however, that Hamas is “unpopular” among some Arab rulers, namely those of Saudi Arabia, United Arab Emirates, Bahrain, and Egypt. But those rulers lack popularity among their own peoples. In Egypt, for instance, the turnout for the election that Sisi won was so low that he needed to tweak the rules and extend the vote for an additional day, even after which his popular mandate remained weak.
To argue that Kerry should not act for “a quick halt to the bloodshed” is equivalent to saying that more innocent people should die if it would lead to a better political settlement. That is ethically and legally problematic. A political settlement written with the blood of children and civilians is callous, cruel, and damaging to any hope for a just solution.
Kerry did not choose to side with Turkey and Qatar, he was forced to deal with them because Saudi Arabia, UAE, and Egypt are not interested in ending the violence. These rulers are interested in ending Hamas. Unless Mr. Ignatius thinks that ending Hamas is possible at this point, there is no other option but to find intermediaries who can convince Hamas to agree to some kind of a truce. Mr. Kerry thinks that Turkey and Qatar can play that role. And that is separate from the negative roles I believe Turkey and Qatar have played in amplifying sectarian violence elsewhere. As to ending Hamas’s existence, even the current Israeli leaders are not suggesting that through a prolonged military action they will be able to wipe out Hamas. Their stated goal is to disarm Hamas and other radical groups and destroy the tunnels, and it should be said that even those goals are impossible to achieve because, they, too, were siding with the Arab block that has no political or ethical capital among the peoples of the Middle East.
Israeli leaders continue to change the goal posts in dealing with Hamas while ignoring Abbas’ overture for a negotiated peace. Ten years ago, most people condemned the targeting of civilians by suicide bombers. Now that Hamas is waging a traditional war, Israeli leaders want them to stop using missiles and digging tunnels while Israeli planes, ships, and tanks continued to shell densely populated Gaza cities, killing in the process more than 1000 people—85% of whom are civilian children, women, and men. There are no laws against building tunnels used for defensive purposes and there are no laws that deny any people the right to acquire defensive weapons. Instead of continuing to suffocate the Palestinians, Israeli leaders should have taken the opportunity to work with the State Department to reach a negotiated settlement instead of building illegal settlements on occupied land.
Gaza has been under air, naval, and land blockade since Hamas took over. Israel attacked the strip three times and failed to disarm Gaza’s armed groups. In fact, after each military operation, armed groups in Gaza became better trained and more adapt. Apparently, Israeli leaders seem to think that Hamas will be weak now since they lost their ally in Egypt (the Muslim Brotherhood), are openly targeted by Saudi Arabia and UAE, and lost the support of Syria and Iran. That is a gross miscalculation. Should the war on Gaza continue for few more weeks, Israel will be isolated from the rest of the world and the rulers of Saudi Arabia and Egypt will be under threat, not Hamas. The Palestinian issue has always been, and still is, the barometer by which the standing of Arab leaders is measured. The Arab Spring—the popular and non-violent version of it that is—eliminated two of the Arab leaders who were most careless in dealing with the Palestinian cause. While Saudi Arabia remains, for now, immune to popular protest due to its tribal structure and total absence of civil society institutions, al-Sisi should be worried that he could face Mubarak’s and Morsi’s fate.
Mr. Ignatius seems to ignore that the Arab Spring, with its successes and failures, had created a new reality in the Middle East. For him to suggest that the U.S. administration can choose which Arab leaders decide the fate of Gazans is to ignore the transformations of the last four years. Kerry is not acting “contrary to the interests and desires of the United States’ traditional allies, such as Egypt, Jordan, [and] Saudi Arabia.” He is acting with the knowledge that those traditional allies were made irrelevant by the Arab Spring. He is acting with the realization that rulers sustained by clan dominance and military juntas lack legitimacy. The days of telling the Middle Eastern peoples who their leaders ought to be are gone; this is the New Middle East in a state of violent birth.
____________
* Prof. SOUAIAIA teaches at the University of Iowa. His most recent book, Anatomy of Dissent in Islamic Societies, provides a historical and theoretical treatment of rebellious movements and ideas since the rise of Islam. Opinions are the author’s, speaking on matters of public interest; not speaking for the university or any other organization with which he is affiliated.
FacebookTweetPinLinkedInPrintEmail