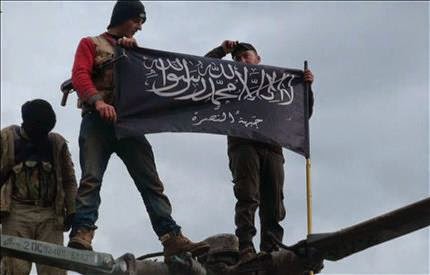 On May 7, Syria’s Daraa province witnessed three events. First, battles broke out in the western countryside and militants started advancing toward the province. Second, a march was staged in support of the regime, near the location where armed confrontations were underway. Third, tension between Jabhat al-Nusra and other armed groups escalated in the south, against the backdrop of the arrest of Ahmed Nehme, leader of Jabhat al-Nusra’s military council.
In addition to this, extremist armed men released 40 persons, including 15 women and children, who were kidnapped in the northern countryside of Latakia, after the armed men had stormed into a number of towns in August.

Militants announced their control of the hills of Matouq al-Kabir and Matouq al-Saghir and the town of Kharbat Fadi, in addition to a military checkpoint in the vicinity of the village of Ankhel, south of Daraa.

Opposition field sources, however, said, “Supply corridors were opened to advance farther into the west and south toward the city of Nawa and the countryside of Quneitra, where various military centers affiliated with the army, such as in Tal Oum Houran, are located. It has also become possible to control the hills, from which any movement was stopped with fire and sniping.”

The sources added, “The battle was fought with the participation of al-Mathna Islamic Movement and the Islamic Front — Ahrar al-Sham in particular — in addition to many brigades affiliated with the Free Syrian Army (FSA), such as the Hamza Battalion, the 69 Special Forces group, the Yarmouk group, the Ghuraba Houran Brigade, al-Muhajireen Brigade, al-Ansar Brigade and the al-Madfaiya First Regiment.”

People took to the streets in support of the army and armed forces in the city of Azraa in the countryside of Daraa, 25 kilometers (15 miles) from the location of the battle. SANA news agency reported, “The residents of the city took to the streets in support of national principles and a constitutional referendum.” The participation of state officials in the march for the first time in this region, such as Deputy Foreign Minister Faisal Mekdad, was worth noting.

On another note, tension continues in the Houran plains, as Jabhat al-Nusra is still holding Nehme captive as well as the leader of the al-Fursan First Regiment, Ahmad al Masalama. Jabhat al-Nusra disseminated a video showing the confessions of Nehme, who admitted his responsibility for a number of battles that ended with defeat. This video was considered an attempt to galvanize public opinion against him.

Jabhat al-Nusra called for the formation of a joint tribunal with the FSA, whose members were on alert due to the fact that Nehme and Masalama belong to tribes in Houran. This augurs an impending risk of confrontations erupting between armed groups in the region.

Some sources said, “The risk could expand to include large-scale fighting, given that the Houran community is based on tribalism that forces it to defend and care for each other. Additionally, a large number of battalions are made up of members of the same tribe. Some of them fight members of their own tribe who are fighting with the FSA and Jabhat al-Nusra, which means that there is a possibility of internal conflict.”

On the other side, some activists noted a new rigor on the part of Jordan in dealing with the battalions. The latter fear Amman will cut ties if the crisis of detainees by Jabhat al-Nusra does not end. Jordanian intelligence is facilitating the transport of injured people, ammunitions and displaced people through unofficial corridors. This could completely stop and create a crisis, with the FSA militants paying the price. This explains the escalation and galvanization on the part of scores of brigades and battalions in the countryside of Daraa in anticipation of any potential battle with Jabhat al-Nusra.

In Deir el-Zour, clashes between the Islamic State of Iraq and al-Sham (ISIS) on one hand, and Jabhat al-Nusra, the Islamic Front and FSA-affiliated factions on the other, continued, notably on the axes of Jdid Aqidat, Jdid Bakara, Harmoush, Tabiya and Sobha.

Yesterday [May 7] was the deadline set to accept the initiative of the Furat tribes, of which Jabhat al-Nusra announced its approval. ISIS continued to ignore the initiative. The fighting grew fierce in Aqidat in particular, as new reinforcements came to ISIS from the town of Maadan in Raqqa under the leadership of the military leader of ISIS, Omar al-Shishani. Meanwhile, Amer al-Rafdan, the ISIS emir in Deir el-Zour led the attacks on the axis of Harmoush, knowing that false news about him being killed was disseminated.

The fighting zones witnessed a heavy displacement of residents, especially after all parties carried out field executions upon entering the region. This has instilled fear among residents and led them to flee their homes to more secure regions, if there are any.

Armed clashes between the two parties were accompanied by fierce media campaigns on social media led by the supporters of both sides. These campaigns aimed at demoralizing the other party through posting false news. For example, stories were posted on the injury of ISIS emir in Hassakeh, Abu Osama al-Iraqi and his transfer to an intensive care unit. This false news was countered with factual information related to the Jabhat al-Nusra emir, Abu Hassan al-Kuwaiti, fleeing to Turkey.

The Arab leaders and the myth of exceptionalism

absent: Western journalists second hand reporting on the Syrian war and the propaganda against the Syrian government