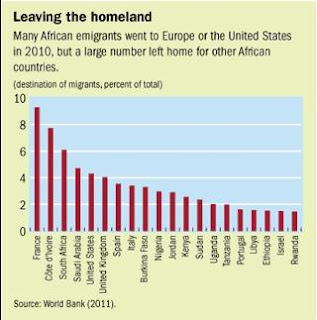 Since the start of the Libyan uprising, mainstream news outlets have reported that African and even Eastern European mercenaries were fighting with Qaddafi’s forces. The Libyan rebels, eager to minimize any support for Qaddafi among the Libyan population, have fed western media horror stories of mass murder carried out by Black Africans. Consequently, many immigrant workers were caught between the ire of a regime that did not care much for them and a new wave of prejudice and discrimination fueled by the media and rebel propaganda. The fact that some foreigners fought for the regime does not tell the full story. Most African immigrants were unwilling participants in a war that no one had anticipated.

Using Libya’s large oil revenues as if they constituted his personal fortune, Qaddafi engaged in meddling in the affairs of his neighbors, supporting nationalist movements, and conspiring to overthrow regimes he did not like. He also used immigrant workers to blackmail his neighbors. In the 1980s and 1990s Qaddafi gave hundreds of thousands of Tunisian workers hours, not days, to leave the country empty-handed. The sudden “dumping” of workers without their earnings was meant to create economic and social crisis for neighboring governments. That was his way of punishing the Tunisian authoritarians Bourguiba and Ben Ali. He used the same tactic with the Egyptians. But Qaddafi’s most bizarre achievement was coaxing some European leaders to use him as a gatekeeper, in charge of preventing Africans from reaching the shores of Europe.
Speaking at a ceremony in Rome on August 31, 2010 and standing next to (then) Italian Prime Minister Silvio Berlusconi, Qaddafi declared:

Tomorrow Europe might no longer be European, and even black, as there are millions who want to come in. We don’t know what will happen, what will be the reaction of the white and Christian Europeans faced with this influx of starving and ignorant Black Africans. We don’t know if Europe will remain an advanced and united continent or if it will be destroyed, as happened with the barbarian invasions.

European leaders did not object to these words, despite their abhorrently racist nature. In fact, even after the Libyan people began their revolution in early 2011, Berlusconi claimed that his personal friendship with Qaddafi prevented him from taking an active role in NATO’s mission in Libya.
What was never asked is the obvious question: why would Africans demeaned, insulted, and belittled by the dictator risk their lives for him? Why would “ignorant Black Africans” pay with their blood and sweat for a dictator who called them so?
According to reports, Qaddafi asked the EU to pay him about $6.3 billion a year to stop illegal African immigration. It is evident that since the Italy-Libya friendship agreement, Qaddafi became very effective in stopping the flow of African immigrants to Europe through Italy. According to European Commission figures, the number of people caught trying to enter Italy illegally fell from 32,052 in 2008 to 7,300 in 2009. These figures do not include the number of young men who perished at sea trying to find different escape routes. They drowned when their makeshift rafts fell apart. Those who reached the EU shores were immediately returned to the brutal regimes of North Africa. On numerous occasions, Italy intercepted immigrants and handed them over to Libyan authorities without screening and without the due process required by human rights treaties.
Unemployed Africans, like unemployed Latin Americans, go north to make a living and to feed their families, not to fight ideological wars. Immigrants cannot choose their line of work. In the case of Libya, Qaddafi used European money to hire some of these immigrants, and to deport others. Given his distrust of his own people, he hired many of these immigrants in the security sector before the uprising began.
Like in the U.S., the rights of immigrant workers are not part of the national conversation until there are national economic implications. In the U.S., a national need for seasonal migrant workers meant that the government eased border controls to allow up to 12 million people to cross. When the unemployment rate went up and the economy slowed down, all political parties developed slogans to deal with immigration issues. In Libya, Qaddafi used immigrant workers as bargaining chip to blackmail other states.
In Europe, former colonial powers wanted to limit migration from Africa. They relied on the southern rim countries to keep sub-Saharan Africans from reaching Africa’s northern shores. Then, in 2008, the French president and several other European leaders pushed for the creation of the Union for the Mediterranean, consisting of over 40 nations with the actual (but unstated) aims of offering Turkey an alternative to the EU and creating a buffer zone in North Africa. Naturally, these efforts failed given the dissonance between its stated goals and intended aims.
The former Libyan dictator’s words and European attitudes towards the people from the south is more than economic and social policies. They stem from latent racism and cruel indifference to the plight of millions of people who have been disadvantaged by unfair economic trade, political corruption, and natural disasters. While the latter cannot be blamed on anyone, the former two causes of unemployment and poverty in the south can easily be traced to Western complicity. Western leaders’ support of corrupt dictators and unfair trade practices contributed to the harsh conditions these people want to escape. Both sides– African and European–would be better served by an honest commitment to respecting human dignity irrespective of national origin and citizenship status. The powerful North ought to adopt an international relations system founded on shared humanity, not on artificial borders.
_______________

* Prof. SOUAIAIA teaches at the University of Iowa. He is the author of the book, Contesting Justice. Opinions expressed herein are the author’s, speaking as a citizen on matters of public interest; not speaking for the university or any other organization with which he is affiliated.
FacebookTweetPinLinkedInPrintEmail