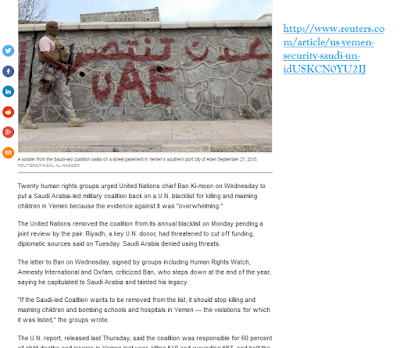 Saudi Arabia’s bizarre behavior was on display, again, during the last two weeks. The recent actions reveal how Saudi Arabia’ rulers leverage the kingdom’s oil-generated wealth, Wahhabism, and religious sites and institutions to exert unmatched control in world politics–unmatched even by the superpowers of today.
Here is the chain of events.
On Thursday, June 2, the United Nations released its blacklist of states and armed groups that violate children’s rights during conflict. In it, Saudi Arabia–and its coalition partners but mainly Saudi Arabia–was found responsible for “killing and maiming children in Yemen.” The report concluded that the coalition led by Saudi Arabia “was responsible for 60 percent of child deaths and injuries last year, killing 510 and wounding 667… The coalition carried out half the attacks on schools and hospitals.”

Saudi Arabia’s PR and diplomatic missions’ machines shifted into overdrive. First, as reported by several news outlets, its top diplomats informed UN officials that unless Saudi Arabia is removed from the list, the kingdom will stop funding all UN agencies. Second, and to facilitate its break with the UN, the rulers summoned Wahhabi religious clerics to meet and issue a fatwa declaring the UN “anti-Muslim”, thereby justifying the cutting of aid and dues to the UN. Third, the rulers called on members of its coalitions–the Arab coalition supporting its war on Yemen and the Islamic coalition supporting its alleged anti-terrorism efforts–to pressure the UN to remove the kingdom from its blacklist. Within a week, the UN announced that it was removing Saudi Arabia and its war on Yemen coalition partners from the list pending a joint investigation.

Have the rulers of Saudi Arabia achieved anything from this show of power and influence? Yes, they have achieved this: a clear demonstration that money offers rich individuals and nations immense power to obfuscate the truth. At what cost? The Saudi rulers multiplied their losses rather than curtail them.

1. Once on the list, the image of the kingdom has been irreversibly tarnished. By forcing the UN, through reported threats and enticements, to remove it from the blacklist, it added new damage: it exposed the kingdom’s rulers as bullies, arrogant, and thugs who resort to blackmail to achieve political goals.

2. When they called on their religious figures to issue a fatwa against the UN, they solidified the perception and the reality of their use of Islamic institutions in service of political masters, not the other way around as suggested by the titles the rulers choose for themselves: Servants of the Two Noble Sanctuaries.

3. The pressure the Saudi rulers exerted on their already reluctant coalition partners will gradually alienate those countries who find other reliable partners who will not use them the way the Saudi rulers do. Once that happens, the government of Saudi Arabia will be on a path to being isolated.

4. The Saudi rulers’ reliance on religious institutions as a convenience kiosk of fatwas-on-demand exposes the rulers’ insidious campaign to define Sunni Islam through a Wahhabi filter.

The events unleashed by the so-called Arab Spring have transformed Saudi Arabia and its Gulf allies in ways they hardly imagined. First, Qatari satellite TV channel, Aljazeera, which reserved the right to criticize all Arab governments except those ruling the CCG member states, was exposed as a sectarian political tool in the hands of the ruling elite. Second, Saudi Arabia’s aggressive interference in the affairs of Muslim countries through bribes and threats was exposed. Some of the recently revealed actions show the extent of their otherwise secret dealings:  giving millions to Malaysian politicians, supporting Sunni tribes in Iraq to remove the elected prime minister—Nouri al-Maliki, arming Salafi fighters in Syria to overthrow the Syrian government, bombing Yemen to extend the rule of an interim president, offering refuge to a Tunisian dictator wanted for murder and embezzlement, supporting Egyptian military rulers who removed a democratically elected president, blocking the selection of a president in Lebanon, reneging on a gift to Lebanese military, and supporting Morocco to punish Algeria for challenging its control over the Arab League.

This problem with the UN report is indeed all bad news for the Saudi rulers. But it ought to be good news for the Muslim peoples. It exposes the Saudi rulers’ use and abuse of religious institutions and their perversion of Islam to preserve their corrupt, clannish control over sites revered by billions of Muslims around the world. This exposure is a necessary step for dealing with one of Saudi Arabia’s most dangerous brainchild: al-Qaeda and its derivatives. By examining the Saudi use of wealth and religious institutions, Sunni Muslim thinkers will begin to address the origins of ISIL’s corrupted interpretation of Islam and act against its genocidal agenda that is rooted in Saudi Wahhabism.
___________________________
* Prof. SOUAIAIA teaches at the University of Iowa. His most recent book, Anatomy of Dissent in Islamic Societies, provides a historical and theoretical treatment of rebellious movements and ideas since the rise of Islam. Opinions are the author’s, speaking on matters of public interest; not speaking for the university or any other organization with which he is affiliated.