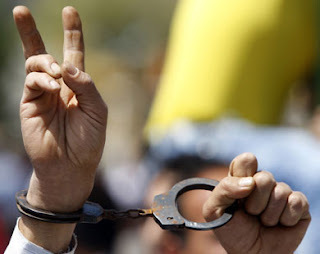 Before his ouster, Hosni Mubarak fired a desperate, last shot. He handed over all his authorities to the military, from whose ranks he rose to power. He reasoned that if he cannot keep power, he should preserve influence. Since then, the military has walked a tight line between appeasing the powerful Muslim Brotherhood and protecting the old regime. The Muslim Brotherhood, too, practiced smart politicking by standing at an equal distance between the revolutionary youth who wanted a total break with the old regime (including the military). Both sides, the military and the Brotherhood, managed the transition like skillful chess masters.

The military did not move a single step forward unless necessitated by events in Tahrir Square. From drafting the blueprint to electing new legislature to commencing Mubarak’s trial, the military never initiated actions to speed the transition to civilian rule, which the generals promised will take place within six months, or punish those guilty of corruption and murdering protesters.
The parliamentarian and consultative elections finally happened (late last year and early this one) and the result was alarming for the military and the old guard. Over seventy percent of the seats went to various Islamist parties, Mubaraks’ most formidable nemesis. However, since the military was able to preserve some of the old institutions such as the media and the courts, it was able to manage the events in ways that preserved its interests despite Islamists’ gains.
When the first round of presidential elections produced a head-to-head contest between a representative of Mubarak’s regime and a member of the Muslim Brotherhood, the old guard, represented in the constitutional high court, effectively launched an Algerian style coup, dissolving an elected institution. The court also allowed the last prime minister under Mubarak to compete for the presidency. Potentially, the court’s ruling could result in incalculable results for all sides. For this reason, contradicting statements were released by key players and nervous quiet followed the event.
Immediately after the release of the ruling, a leading member of the Muslim Brotherhood, Mohamed Beltagy, described it to be a coup. The Muslim Brotherhood’s candidate however, Mohamed Morsi, denied that there was a coup and insisted that he is moving forward with his campaign. He insisted, nonetheless, that elections’ results could be falsified and threatened a second revolution should that happen. Many activists and revolutionaries were simply too stunned by the ruling to react.
Apparently, on Saturday and Sunday, Egyptians will use the ballot box to create a new form of dictatorship, given the absence of a legislature and a constitution. If they elect Morsi, he may dissolve the court and reinstate the parliament which would serve to rubber stamp his decisions. Should he do so, the military may challenge the will of an elected president to preserve the ruling of a court from the era of a de-legitimized regime and that could produce protracted chaos. If Ahmed Shafik wins, he would likely support the court’s ruling and recreate the old regime with the consent and assistance of the military.  Either way, due to the failure of the revolution to purge the country of the old regime’s leaders and institutions, a new form of dictatorship could be in the making and the military and Mubarak are responsible for it, again.
Related articles:
Why did the leaders of the Muslim Brotherhood change their mind about fielding a presidential candidate?
The dissipating prestige of the Egyptian military
What can the Egyptians learn from the Tunisian experience?
Military is trickle-feeding democracy to change-hungry Egyptians
_______________________
* Prof. SOUAIAIA teaches at the University of Iowa. Opinions expressed herein are the author’s, speaking as a citizen on matters of public interest; not speaking for the university or any other organization with which he is affiliated.
FacebookTweetPinLinkedInPrintEmail

What is a country without its people