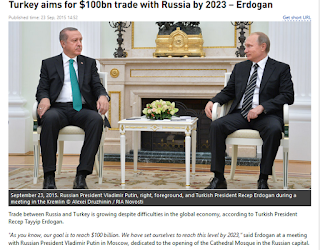 At one point last year, when the Turkish and Russian leaders had their last meeting, they had hoped that economic trade between their two countries would reach $100 billion. Turkish leaders also wanted to triple trade with Iran to $30 billion. Erdogan, the co-founder of the AKP that has governed Turkey for a decade and a half, knows the importance of economic growth for him to remain in power and shape the country’s future to his liking.
The problem for Erdogan is that his economic agenda was in direct conflict with those two countries’ political and economic interests. Erdogan’s interests in Syria are mainly rooted in sectarianism and nationalism. So when Russia and Iran increased their military presence in Syria last September to protect their economic interests and defend religious minorities and sites, Erdogan lost his cool. He ordered his pilots to shoot down a Russian bomber claiming that it violated Turkish airspace–a claim denied by Russian military. Erdogan’s reasoning for taking aim at a Russian military asset–a first by any NATO member in more than 50 years–was difficult to decode. Perhaps he hoped that the downing of the Russian jet would force Putin to respond militarily, drawing NATO, in which Turkey is a member, deeper into the Syrian conflict. That did not happen. Instead, Putin relied on economics’ lever to punish Erdogan. Based on the final outcome, it would seem that Putin’s strategy worked.  After refusing to apologize and accept responsibility for shooting down the plane for seven months, Erdogan blinked. He did exactly what the Russian leaders wanted him to do.
The important fact is this: Russian-Turkish relations suffered because of the conflict in Syria and it can’t be amended without finding some common ground on that issue. Russia has nothing to offer since Putin’s position has been consistent all along: only Syrians can decide if Assad stays or leaves and priority should be given to combating terrorism . Erdogan, on the other hand, has insisted, as did the Saudi rulers (and Qatari rulers before them) on overthrowing Assad and his regime. The Russian position is politically and normatively correct. The Turkish and Saudi position is absurd. They argued that Assad lost legitimacy because Syrians are dying under his watch. If that is the standard for legitimacy, then how can the Turkish government that has killed more than 50,000 of its Kurdish citizens and the Saudi rulers who are killing children in Yemen (according to UN and NGO’s reports) and Syrian citizens (by arming opposition groups) dictate the fate of the leader of a sovereign nation?
Erdogan may have learned something from the Qatari ruler, Hamad: when you make an ultimatum and fail to achieve it, step aside. Erdogan will not step aside, of course. He thinks that he is exceptional. Instead, he forced out his prime minister, Ahmet Davutoğlu–the architect of zero-problem with neighbors’ doctrine. In doing so, he gave the public the illusion that any change in foreign policy will be due to the change of government. That way, he continues to take credit for positive outcomes and blame the negative outcomes on the government.
AKP’s formula for Turkey’s economic prosperity was based on the principle of “zero problem with neighbors.” Erdogan proved the efficacy of that formula when he violated it. Since he involved his country in the project of overthrowing the Syrian regime, Turkey lost all the significant neighbors: Syria, Iraq, Iran, and Russia, and that destroyed the Turkish economy. Consequently, amending ties with these neighbors requires a change in Turkey’s position on Syria. That much is clear.
Given the numbers of foreign fighters, militant groups, and weapons inserted in that country, Syria’s civil war might last for another ten years. By then, Assad will not be able to remain president as per new constitutional term limits. Can the Saudi or Qatari ruling clan promise that they will transfer power to elected governments in ten years? Erdogan, too, has risen to power thanks to his party’s reformed practices which imposed term limits on its leading members. After two terms as prime minister, he should have quit to honor that policy. Instead, he circumvented those limitations by assuming the role of an executive president without constitutional authority. He is now working backward, pushing to amend the constitution to retroactively bestow upon himself some legitimacy. While in power, he jailed critics, seized media outlets, prosecuted those who “insult” him, and killed peaceful protesters. These are not the practices of a legitimate democratic leader–they are the practices of a cruel megalomaniac. Would he appreciate a foreign leader calling for his overthrow?
___________________________
* Prof. SOUAIAIA teaches at the University of Iowa. His most recent book, Anatomy of Dissent in Islamic Societies, provides a historical and theoretical treatment of rebellious movements and ideas since the rise of Islam. Opinions are the author’s, speaking on matters of public interest; not speaking for the university or any other organization with which he is affiliated.
FacebookTweetPinLinkedInPrintEmail