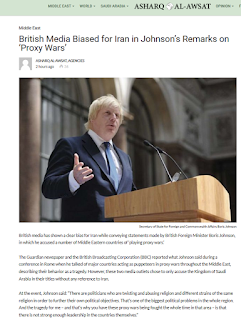 When the British government is forced to choose between factual truth and political imperatives, it chose politics 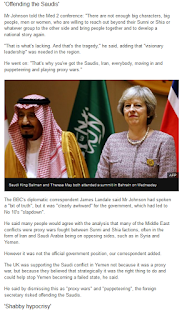 The UK’s Foreign Secretary Boris Johnson stated a fact almost universally known by now. He pointed out that Saudi Arabia is fomenting sectarian war in the region. Saudi officials were angered by the comments and Saudi media accused British media of having an Iranian bias when reporting his comments.
Saudi rulers’ unhappiness with UK media is not specific to this particular instance. They are threatened by the rise in news stories portraying the Saudi military campaign in Yemen in a negative light. BBC had several programs that put the blame for the horrific conditions of children in Yemen on Saudi Arabia. Moreover, UK media in general is highlighting the hypocrisy of UK government, which criticizes Saudi War in Yemen, but keeps selling weapons that enable the rulers of the kingdom to conduct its destructive war in Yemen.
In its attempt to manage this crisis, especially that UK premiere was a guest during the GCC summit in Bahrain, Downing Street was forced to release a statement distancing itself from Johnson’s views.
Johnson’s comment is just one in many negative statements made by Western leaders, in the last two years, accusing Saudi Arabia of spreading an extremist interpretation of Islam

and supporting terrorist groups around the world. Outgoing U.S. president, Barack Obama made the case against Saudi Arabia in a 90-page long article summarizing his views in The Atlantic. Last summer, German intelligence officials also accused Saudi Arabia of building Islamic centers in the West that promote Wahhabism. The incoming U.S. administration will likely take a harsh stance against Saudi Arabian leaders as well.

In short the Saudi rulers must reform their political and religious institutions to be able to live in peace with their neighbors or risk crippling isolation.
FacebookTweetPinLinkedInPrintEmail

Why did the Salafi Party in Egypt support the removal of Morsi and the Muslim Brotherhood?