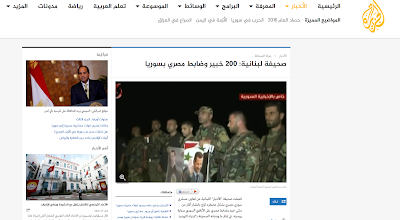 Qatar’s global media outlet, Aljazeera, reported that 200 Egyptian military officers and experts are now in Syria. The report, is based on a Lebanese source, came days after the Egyptian president, Abdulfattah al-Sisi, in an interview to Portuguese media, said that he supported the Syrian national army in its war on terrorists. This seemingly new position has angered the Gulf States, especially Saudi Arabia and Qatar, who back the Syrian opposition fighters and have been pushing for the removal of the Syrian president Bashar al-Assad.
Some sources, however, have also revealed that Qatar is training Egyptian Islamists in Idlib, Syria. This revelation could explain the increased collaboration between the Syrian and Egyptian governments. Egypt, like Syria, has been battling Salafi and other Islamist militants. If these elements are being trained in Syria and supported by Qatar, Egypt will be forced to collaborate with the Syrian and Libyan governments who are facing the same threats.
Fath al-Sham, formerly known as al-Nusra front, which is backed by Qatar, controls Idlib, and has released multiple videos showing individuals engaged in war games, with indication that some of these fighters are not training for the war in Syria, which could support the assertion that Idlib is turning into training grounds for fighters from other countries, including Egypt, China, Tunisia, France, and Algeria.
It should be noted also that when al-Julani, the leader of al-Nusra, announced the name change of his group’s name into Jabhat Fath al-Sham, sitting next to him was a known Egyptian Salafist, another reason for Egypt to be concerned about the role of Qatar in supporting groups that might pose a security threat to Egypt. 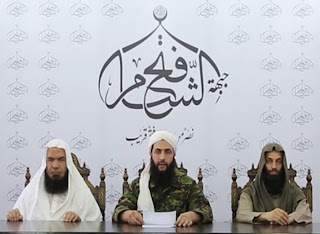