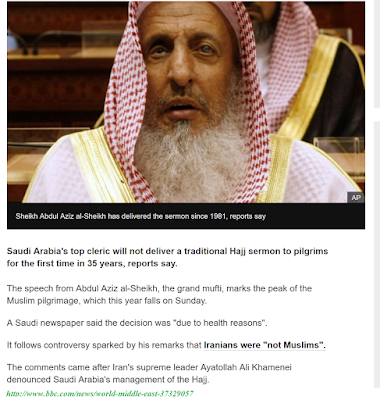 Trump, whose first executive order as president imposed a Muslim Ban, which was blocked by U.S. courts and opposed by civil society institutions, was declared a “true friend of Muslims.” That declaration was made by the Saudi Deputy Crown Prince, Mohammed Ibn Salman, who recently mocked an entire religious community, Shia Muslims who believe in Mahdi as a messiah (btw, Many Sunnis also believe in an Awaited Mahdi), for the tenets of their faith as a cause for his regime’s hostility towards Iran. It is extraordinary that a member of a ruling clan that espouses Wahhabism, which holds that the earth is flat, playing chess as haram (proscribed) and a number of other absurdities, declares that he will only normalize relations with a neighboring nation when it abandoned its religion.
The Saudi kingdom is built on three pillars of supremacy: The supremacy of the Saud Clan, the supremacy of being Arab, and the supremacy of Wahhabi Salafism, all of which are canonized in the official name of the kingdom and the titles of its rulers: The Kingdom of Saudi Arabia (KSA), ruled by the Custodian of the Two Noble Sanctuaries, Salman, and his select princes, God’s Commanding Guardians [Awliya’ al-amr]. This arrangement allows the Saudi rulers to subjugate its people treating them as a flock [ra`iyya]–not citizens.
The Saudi rulers further segment Saudi society into classes with varying rights and privileges: women are subordinate to men, non-Arabs are subordinate to Arabs (except European white men), non-Muslims are subordinate to Muslims, and non-Sunni Muslims are subordinate to Sunni Muslims, and poor persons are subordinate to rich persons. These values, principles, and practices guide their domestic and foreign policies. Ibn Salman’s characterization of Trump as a “true friend of Muslims” makes sense in such a context. In the mind of the Saudi rulers, Trump is the Commanding Guardian [Wali al-amr] over Muslim-Americans. As a rich white man, he is on the same level as members of the Saudi ruling family. He is, then, a true friend of Muslims—rich, Wahhabi Salafi Muslims that is.
The Saudi rulers have subjugated the people of the Arabian Peninsula for more than seventy years. They used all resources, connections, and their control over religious sites to attempt to subjugate the rest of the Muslim people around the world. However, Muslim-Americans, especially Sunnis, should not tolerate the offensive paternalism of a misogynistic, supremacist, callous rulers. For Muslim-Americans, Trump is a public servant, not a Commanding Guardian over them. They don’t need rulers from thousands of miles away, to tell them who is a “true friend of Muslims and who is not. A regime that bombs children in Yemen and treats non-Saudi Muslims as inferior to Saudis lacks the moral standing to represent anyone but itself. In fact, the Saudi rulers stand guilty of fomenting sectarianism, hatred, and bigotry.
Only an ignorant person would believe the Saudi rulers’ claim of leading the Muslim world and only a bigot will share their worldview.
FacebookTweetPinLinkedInPrintEmail