Skip to content
FacebookTweetPinLinkedInPrintEmail
ISR comment: Four Arab States want Qatar to close down Aljazeera, a sign that the current crisis is in fact a reaction to and fear of the protest movements popularly known as the Arab Spring. It was on the pages of ISR that the role of Aljazeera in galvanizing social change in the Arab world was thoroughly explained and it was on the pages of ISR that the first prediction that the Gulf States will implode from the inside as a result of the change initiated by the protest movement that overthrew Ben Ali (now living in Saudi Arabia) and Mubarak (now back from prison after Sisi regained power).
____________ 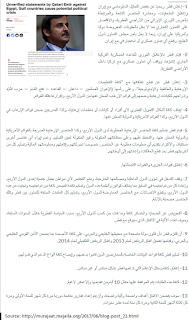 A summary of the demands submitted by the Saudis, Bahrainis, Emiratis, and Egyptians to Qatar through Kuwait:
_____
1. Reduce diplomatic ties with Iran and close its diplomatic missions there. Expel members of Iran’s Revolutionary Guard from Qatar and cut off any joint military cooperation with Iran. Only trade and commerce with Iran that complies with U.S. and international sanctions will be permitted.

2. Shutting down the Turkish military base in Qatar and stop any military agreements with Turkey inside Qatar

3. Announce the cutting of ties to “terrorist organizations,” including the Muslim Brotherhood, the Islamic State, al-Qaida, and Hezbollah. Formally declare those entities as terrorist groups.

4. Stop providing financial support to entities and individuals list on the list previously provided by the four nations.

5. Handover all persons accused of terrorists and seize their property.

6. Shut down Al-Jazeera and its affiliate stations.

8. Pay for all damages caused by Qatar policy and practices in neighboring states.

9. Assure full compliance with Arab decision and agree to honor the Riyadh agreements with Gulf nations of 2013 and 2014.

10. Submit a list of documents by and about opposition figures supported by Qatar.

12. Agree to all these terms within 10 days or it will be considered void.

13. the agreement shall consist of clear mechanism of compliance, including monthly audits for the first year after agreeing to the demands, then once per quarter during the second year, and annually for ten years thereafter.

Egypt’s scorched earth: What is suggested here is that these assaults comprise an orchestrated plan to avenge by and for the Brothers

Analysis: Recognizing the new Syrian National Coalition alone will not end the war in Syria