Skip to content
FacebookTweetPinLinkedInPrintEmail
The White House justified its ban on Muslims coming from seven countries by citing potential threat of terrorism and national security. The facts do not support that argument.

First, it is a fact that none of the terrorists who actually carried out attacks in the United States since 2001 has had any connections to countries listed by the White House. 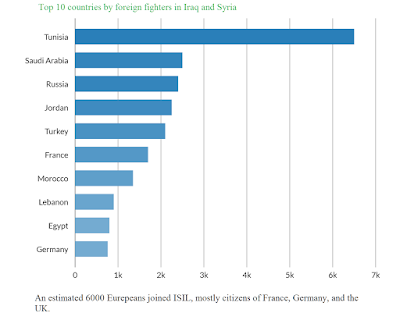 White House officials could argue that the wars in Iraq and Syria  attracted and trained new terrorists and therefore the list reflects that new development. That logic, too, can be refuted by facts and figures. The majority of the fighters who joined al-Qaeda and its derivatives in Syria and Iraq came from countries other than the ones sanctioned by this White House.

By cross-referencing the two sets of data, it becomes clear that more terrorists had come from Saudi Arabia than from any other country. Yet, Saudi Arabia is not mentioned by the White House on its list of countries with potential threat of terrorism. Moreover, and considering the passage of legislation by Congress (JASTA), which candidate Trump supported, allowing families of 9/11 victims to seek justice from Saudi Arabian citizens and officials for any possible complicity in terrorist attacks on Americans, the exclusion of Saudi Arabia is odd. Clearly, there is some bizarre logic at play in determining which country to target by this Muslim ban that splits families, endangers lives already at risk, and violate terms of treaties and conventions ratified by the United States.
The Ban on Muslims is motivated by prejudice, politics, and xenophobia, not by legitimate security concerns. Muslims from rich nations, such as Saudi Arabia, were excluded from the ban while Muslims from poor countries like Yemen are banned. This practice is consistent with this White House’s position that equates being “rich” to being “smart,” and developing oppressive policies guided by this new form of racism, where being wealthy is equated to being innately virtuous. The ban targets the most vulnerable and if it is allowed to stand, more dis-empowered social groups, at home and abroad, will be victims of discriminatory executive orders and arbitrary measures from an administration that, based on its actions thus far,  has little concern for due process, the rule of law, constitutional limits, and human rights.
__________________

Links to statements made by leaders of major US universities in response to the January 28, 2017 Executive order barring Muslims from Iran, Iraq, Libya, Somalia, Sudan, Syria and Yemen from entry to the United States: